The 43rd edition of the Hong Kong International Film Festival kicks off with much fanfare as Hong Kong superstar and film festival ambassador Aaron Kwok and youth ambassadors Jennifer Yu and Neo Yau leads the carpet with the director Renny Harlin and cast (Nick Cheung, Richie Ren, Carlos Chan, Ron Ng, Roger Kwok) of opening film “Bodies at Rest”. This year marks a change in the administration with industry veteran Albert Lee stepping up to replacing the Roger Garcia as Executive Director of HKIFFS.

The illumination of “colours of the dark”, coupled with strong red and contrasting black figure creates an illusion of the unexpectedness and magic of movies. Once again, the HKIFF flame continues as the party begins for the next 15 film-packed days ahead. 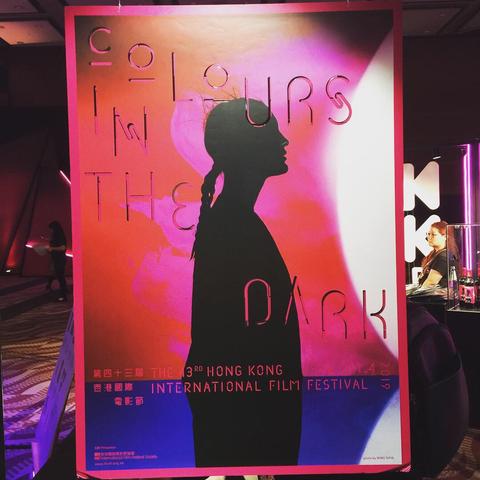 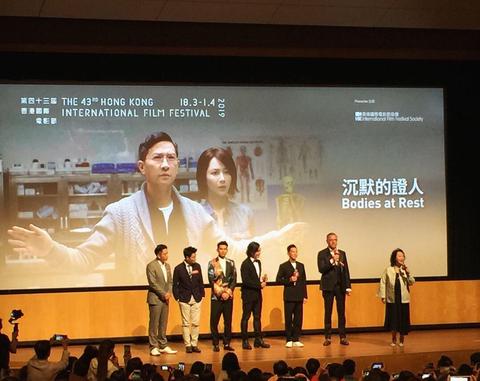 Opening the HKIFF festival requires a film that can generate enough buzz, yet with enough quality for the cinephiles. The director of “Die Hard 2” have been in China over the past 5 years, notably making the rather average Jackie Chan ac

tion starrer in “Skiptrace”, the good news is that “Bodies at Rest” is a return to form for Harlin and the action on display will likely satisfy fans of the genre with a mix of Hollywood blockbuster style action with traditional Hong Kong action choreography. Nick Cheung headlines the film as the pathologist whom is essentially thrown into a situation that you usually find Bruce Willis storming his way through the “Die Hard” series. We get a charismatic villainous display from veteran Richie Ren who is ably supported by rising star Carlos Chan. The only female presence comes from Yang Zi who more than holds her own as the intern at the morgue. The film sets entirely within the

morgue provides an exciting backdrop and action set pieces for Harlin to play with and the result is a straight forward Hollywood inspired action blockbuster with a Hong Kong stylistic twist. 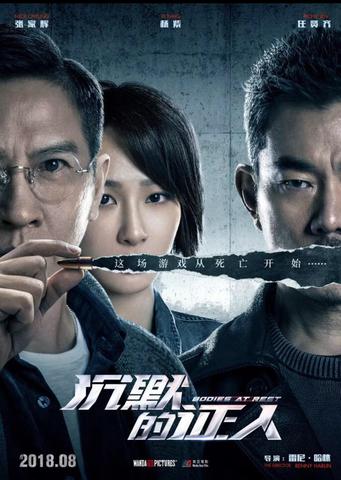 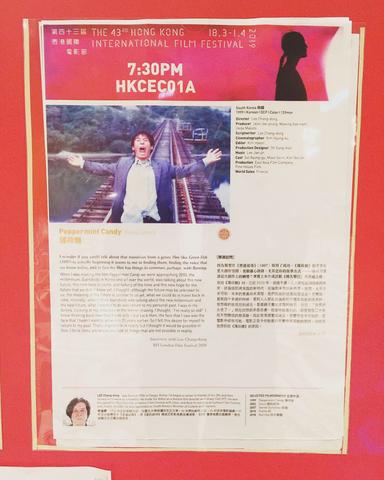 Restored to its original form, witnessing “Peppermint Candy” on the big screen with a sold out audience as part of this year’s HKIFF – “Centenary of Korean Cinema” is simply a joy to witness and experience. Masterclass Director Lee Chang Dong created a brilliant film early in his career that uses reverse analogy to recapture the exploration of the human condition, how we are shaped, influenced by events around us and ultimately the choices we make in love, life and work. It’s the ultimate film in terms of hitting us right on the mark as we know what the protagonist do not making it a constant heartache when we see how his past relationships unfold and how the 1980 Gwangju incident changed his life forever both literally, physically and emotionally. Beautifully restored, the audience are brought back in time as we journey with the train like a personal reflection of our own lives just as we are witnessing a time journey back to 1999 when the film was originally released. Most auteur takes a few films to transcend to this level of maturity, for Director Lee Chang Dong, his second film “Peppermint Candy” remains one of the most important of Korean cinema. 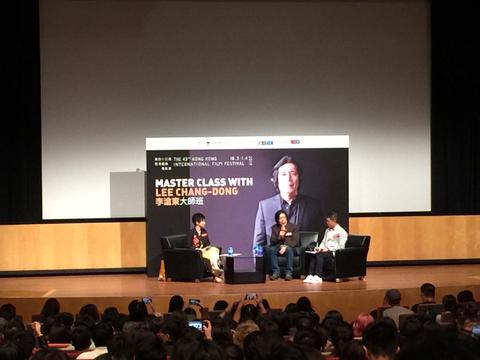 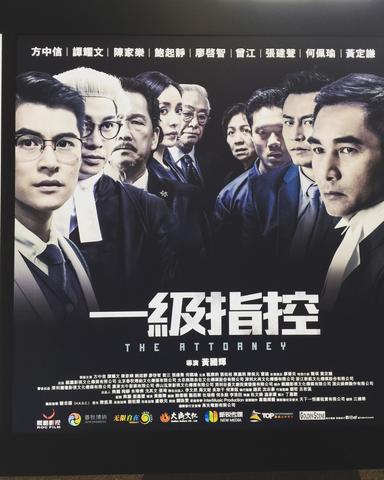 Director Wong Kwok Fai shines in creating a tightly gripped and tense character study of the human and moral condition. Similar to many of the lawsuits and fight for legal justice movies of the early 90s Hong Kong cinema and more recently contemporary Korean cinema featuring big stars in landmark cases against the establishments. Here we get a similar premises, legal justice at sake and how a jaded veteran lawyer (played expertly by Alex Fong) defying conventions and caught in an infernal of a political conspiracy. Carlos Chan performs well as the idealistic young lawyer and veteran award winner Nina Paw does sensationally well in the role of victim’s grandma. What we get is a deep character exploration particularly on the complex layered presented by Fong as he power though a society dominated by the rich and powerful and further highlighted hat justice cannot be achieved simply by playing by the rules. Stay tune for some scene stealing performances from Liu Kai Chi and Patrick Tam. Whilst not entirely perfect, the film contains a tightly knitted plot line and plenty of engaging characters as we witness how the rule of law and legal justice system gets twisted around plays itself in order to achieve a notion of the word “justice”. 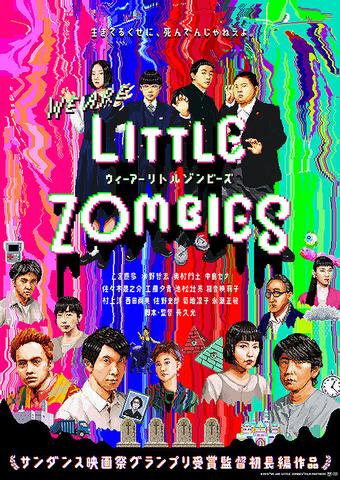 Director Makoto Nagahisa goes hey-wire and absolutely eccentric in the all over the place “We Are Little Zombies”. Clocking at almost two hours, the film is a long slog and one that test even most patient of audience. A lot of things happen on screen and one thing leads to another like almost simultaneously. As if we are witnessing these children roaming around “live”, the result is rather disconnecting as the audience is often set adrift from what’s really happening and rarely drawing a connecting of any sorts. This ends up with detrimental effect as it becomes a catch up game. If the premises are more interesting, perhaps there will be some entertainment value, but unfortunately for the case of this Sundance debutant, it fails to capture this very soul. 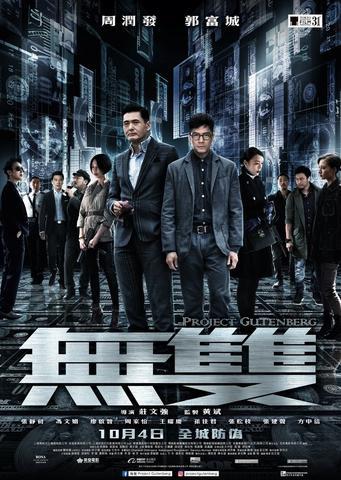 It’s been a while and probably too long since the audience enjoyed a Chow Yun Fat’s performance. After being under the spell of wacky Wong Jing, Chow returns to what he does best, playing complicated characters and firing bullets in John Woo and Ringo Lam’s style. However, that’s just the beginning of the good news as “Project Gutenberg” is thoroughly entertaining, twisted and even layered with depth. It is a highly entertaining and engaging film that uses the maximum creativity of director and writer Felix Chong to craft an ending to not just satisfy the censors, but also the predictability of the audience. That alone is a class achievement by all means. “Project Gutenberg” is not without flaws and the twists and turns adds to that level of mystic. It is a good film that shows the importance of well thought out script and it contains plenty of room for the actors to excel in their respective roles. There are plenty of memorable scenes and most of them included the one and only Chow Yun Fat. This is the kind of quality blockbuster films that Hong Kong filmmakers should be making if they need to head north. As for long time Hong Kong cinema action fans, the king of guns is back. 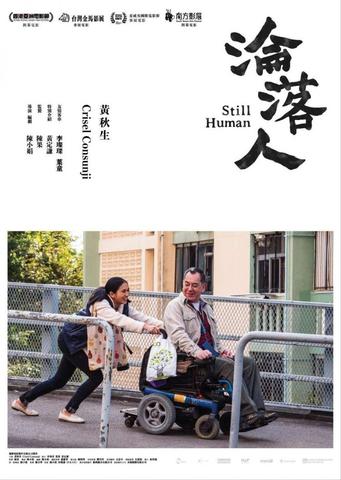 This is a heart warming tale of giving and pursuing of a dream and a better life despite all odds. It’s the classic tearjerker that remains very real as we see strongly developed

characters interacting, going by their daily lives and more importantly a story about the often forgotten humans of Hong Kong, the domestic helper and the disabled. Director and writer Oliver Chan is simply spot on in her feature debut as she crafted a beautiful film about hope, dreams and what it means to be human. “Still Human” shows how powerful and impactful by having a dream and it is ultimatel

y the hope and the selfless giving and helping others to pursue a dream that makes the film extremely relatable and human. With Anthony Wong in top award winning form and an excellent debut performance from Crisel Consunji, director and screenwriter Oliver Chan strikes pure gold and hardly put a foot wrong in this near perfect inspirational tale of the untold. Producer Fruit Chan appears in a short cameo as street hawker owner and looks proud with his prodigy in the making. 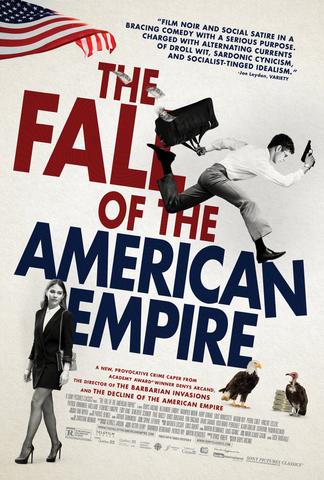 As much as the title of the film wants you to believe that we are witnessing a satire on American culture and capitalism, the latest effort from director Denys Arcand is very much a “Catch Me If You Can” type of movie befalling in the most unlikely source. Alexandre  Landry plays that sort of role, slightly awkward socially, helps the homeless, barely meeting ends as a delivery van driver and a part time hobbyist with a PHD in philosophy. When faced with two hug bags of cash in the middle of a hold up gone wrong, Landry grabs it and the rest is history. It is the playful nature that Director Arcand goes about the whole scenario that made the film a constant delight to watch as we automatically embrace how Landry and his gang outwits the law and the police in the process. Maripeier Morin is simply mesmerising in her first film role as the high class whore turned Landry’s lover and it’s the duo uncanny chemistry that holds the film together. One particular scene resembles “Before Sunrise” is particularly engaging. As much as the film plays out as a heist comedy thriller, at its very core it is constantly a play on the “fall” of society, the meaning of “money” and very notion of humanity. This is easily one of the most enjoyable film of the festival so far. 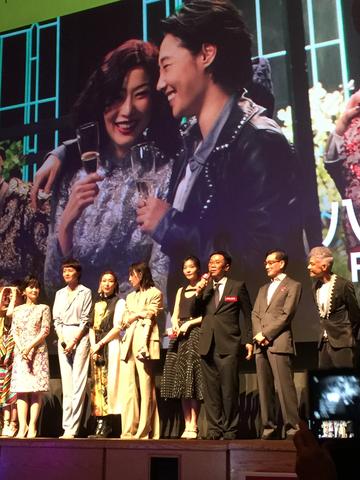 In true Gala Premiere fashion, we get the usual mid-festival star gazing first film at this year’s Hong Kong Cultural Centre with a Hong Kong film. This time we get renowned and respected director Stanley Kwan’s “First Night Nerves” and a star studded cast in presence of Sammi Cheng, Gigi Leung and Bai Baihe to name a few. This is a fantastic vehicle for female actresses in Hong Kong and Kwan is always wonderful in creating roles for the female characters that is a rarity in Hong Kong cinema. In this film, we get to see the best of Sammi Cheng (2nd Film with Kwan) as she plays the Ex-stage actress making a comeback to excellent dramatic effect. This contrast with the more modern acting of Gigi Leung who have improved a lot since the Ekin Cheng-90s pairings. Bai Baihe gets to go against her usual-type role with as a tomboyish yet cool lesbian persona. We get so many good performances all round including most of the supporting acts where even minor characters are suitably memorable. This is not Kwan’s best film by far, but it is also filmed with the same elegance, depth, colour and design. The story is simple, but the real story is the characters’ each and very own and he dialogue is top-notched. This is a very fitting film to kick start this year’s Hong Kong Cultural Centre screenings for HKIFF. 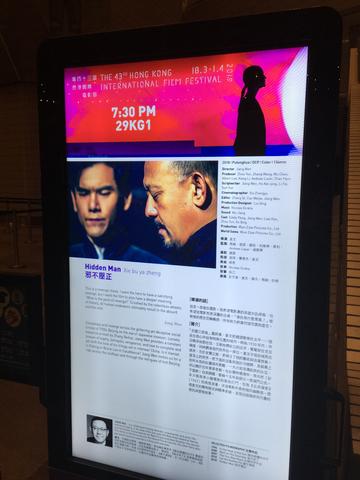 Rounding out the Jiang Wen’s trilogy of films that began with “Let the Bullet Fly” is “Hidden Man”. An intriguing tale of revenge, traitors, betrayals, spies, Japanese pending invasion of China and a genuine love story all disguise within a black comedy action packed affair. Director Jiang Wen (showcased at this year’s festival as part of Masterclass) is really the Tarantino of the East with both the subtle black comedy through to its thoroughly witty dialogue and bloody and direct level of violence. Wen loves Chinese history and with no questions, he tries to paint a picture and through his characters we see the struggles in times of uncertainty. There is a manner in his works, that even the saddest moment provides a glimmer of hope and laughter. Eddie Peng does extremely well as both “Bruce Lee” in terms of the physicality required of the role as well as the vengeful past and Casanova style romance with Wen’s real life wife (played with captivating emotions and lasting memory by Zhou Yun). This is not your normal Chinese history epic or fight against the Japanese, but rather a more lighthearted approach to subject matter that is often dark for many Chinese people. Wen shows that history is hard to change, but there is a move forward and as the film ends on a Hollywood style scream of love, the audience gets a finale.