A modest 74 minutes long, this new documentary from local filmmaker Jennifer Peedom, is actually one continuous montage of fabulous, indomitable mountains and the people who interact with them.

A wealth of gorgeous mountain wilderness images flashes by. You could say it is on the brisk side. But to take in its immense beauty and power, there is nowhere else to see it but on the cinema screen.

Mountain is a unique collaboration between the filmmaker—who is Canberra-born, by the way—and the Australian Chamber Orchestra. The ACO artistic director Richard Tognetti created the glorious score, including the music of Vivaldi, Arvo Part, Beethoven and Greig, and pieces that he composed himself.

Peedom and Tognetti worked on the film together for a number of years, creating a unique fusion of image and music that explores the hold that mountains have on our imagination.

Our guide throughout the journey is Robert Macfarlane, author of Mountains of the Mind, a book that was a major literary success a decade or so ago.

In many ways, the images speak for themselves, but the lines from Macfarlane’s book that provide the occasional commentary and food for thought are voiced by actor Willem Dafoe, who is a bit of a survivor of the extreme on screen himself. 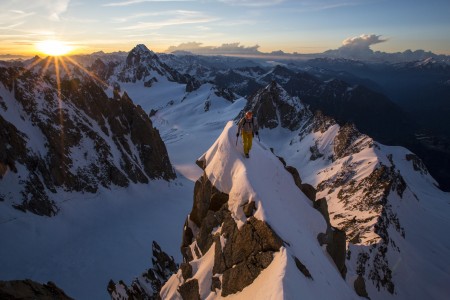 ‘Mountains live in deep time in a way we do not’ the voiceover intones, and they make us humble and are a reminder of our insignificance. What is it that draws men upward? What is the allure in the danger? Is there even a drive to oblivion?

After a pre-credit sequence with the ACO limbering up, Mountain opens with a bird’s eye view, an extreme high-angle shot looking down at a young man flattened against a sheer rock wall, hundreds of metres high. It is vertiginous and spellbinding. He has no safety ropes, he is free climbing and he flashes a smile for the camera. Ecstatic is the word that comes to mind. Crazy is another.

Further in, there are heart-stopping moments of frenzied extreme sports.

Set to some glorious Vivaldi, adventurers dangle above the precipice, and walk across it on high-wire stretched between mountain mesas. Skiers tumble down mountain sides a hair’s breadth ahead of an avalanche, others using the back ends of their skis to break their fall.

And there are cyclists zipping along the spines of high ridges toward the cliff edge over which they tumble into free-fall before their parachute—you didn’t know it was there—opens.

Life on the literal edge certainly sharpens our sense of being, but there are times to pause for thought at the awesome views on top of the world, or for contemplation as the Tibetan prayer wheels spin.

The images are largely the work of cinematographer/adventurer Renan Ozturk, who also has the mountaineering bug himself. His work is breathtaking, the situations he films people in verging on the surreal, though I can’t say that the flow of images edited together always works. Although the images are so intrinsically powerful you hardly notice, I thought that the flow of the juxtapositions a bit clunky at times. It wouldn’t work so well as a silent film.

Clambering up a dangerous peak may have once been considered some kind of lunacy. Today the extreme sports risk-takers are doing it all the time, responding to the ‘siren song of the summit’.

Eventually, the film begins to ask a few questions. Why, as our everyday life becomes more comfortable, do we court danger? Has risk become its own reward? What’s so great about a selfie at the summit, when the climbing experience has meant ‘queueing’ for one’s turn.

Peedom saw at first hand the costs of the modern obsession with mountains, and was a witness to the calamitous avalanche at Everest in 2014. ‘Sharpening our sense of being’ is one thing, but at what cost?

The spirit of Sherpa, Peedom’s 2015 doco, a winner of the very prestigious Grierson award in the UK, is never far from the surface in Mountain, and it gives us food for thought.

This is a magnificent collaboration. A monumental achievement, and not to be missed.